New York, New York –  Reigning World Tournament of 14.1 Champion John “Mr.400” Schmidt will be headlining the American pros at this year’s World Tournament. Opposing his lead will be Germany’s Thorsten Hohmann, who’s red hot 14.1 win last week will gear him and the other Europeans. The USA contingent and Europe will clash next week in New York City. Dragon Promotions and Dr. Michael Fedak will bring another globally star studded field at this year’s 73rd Olhausen World Tournamenthosted by Steinway Billiards in New York on August 19th-24th,2013.  Live stream broadcast will be on www.insidepool.tv
“Out of all the titles I’ve won, the World 14.1 has meant the most to me. I couldn’t even contain the emotions when I made the final break shot last year against Efren. I’m just happy to have done it for all the American players and fans”, said Schmidt. John has two runs over 400 in straight pool and dozens of 200+ ball runs. He is known on tour to be the best pure ball runner in 14.1.
“John did two things last year that changed history. First, he became the first American World Tournament of 14.1 Champion in the new millennium. Secondly, he proved to the world that the Europeans could be beaten. And the first time in this decade, he prevented a European from entering the finals. Then he defeats Efren Reyes!”, explained Charlie Williams, executive producer of the event. Schmidt defeated Thorsten Hohmann in the quarter-finals last year and Germany’s Ralf Eckert in the semi-finals. He then defeated Hohmann again a few weeks later in the finals of the Maryland 14.1, proving his wins were not a fluke. 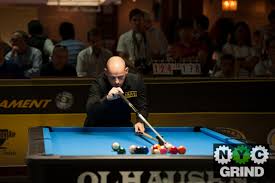 The Europeans dominated the first 6 years since the revival of the World Tournament of 14.1
America will have plenty of backup with heavy hitters such as Johnny Archer (former Bronze Medalist), Mike Davis (former Silver Medalist), Charlie Williams (Bronze Medalist), Max Eberle (Bronze Medalist), Dennis Hatch, Corey Deuel, Shaun Wilkie, and Earl Strickland. Straight pool specialists such as Danny Barouty, Tony Robles, and throwback players Earl Herring and Tom Walters. Newcomers Shane Van Boening and Robb Saez will also be interesting to watch.
However, the work will be cut out for the Americans. 2x World 14.1 Champion Thorsten Hohmann is in top form with multiple 100+ ball runs coming into this year’s event from his recent win. 2x World Champion Oliver Ortmann of Germany will be right behind him as well as Finland’s Mika Immonen who has twice finished with a Silver in this event. France’s Stephan Cohen will return (2009 World 14.1 Gold) , and Germany’s Ralph Eckert (2012 Bronze). Scotland’s Jonni Fulcher has finished high in the event previously and newcomer
Jayson Shaw’s eagle eye shotmaking will be fun to watch. Qualifier winner from Ireland’sGary O’Callaghan will return for his second year, and England’s Darren Appleton (2012 Bronze) has already stated he feels he could have won the Gold last year if he wasn’t
stopped by Reyes.

Through additional support from such sponsors such as Olhausen Tables, Championship Cloth, Aramith Balls, Amsterdam Billiards, Pool & Billiard Magazine, Master Chalk, and now FURY Cues, the absolute best pool players from around the world will arrive on the birth country of 14.1 once more to attend this prestigious event. All to vie for the coveted title of greatest straight pool player in the world.

Get the latest news by following http://www.facebook.com/Worldstraightpool and www.twitter.com/Dragonpromoter
Vendor spaces are also available, for more information on player registration, sponsorship, or if you would like to submit a comment, please emailworldstraightpoolchampionships@gmail.com or contact Dragon Promotions at 1-407-782-4978. Full event info is at www.dragonpromotions.com

Join the 141 Club ! Limited to the first 141 members. Visit http://www.worldstraightpool.com/tickets.html  Tickets will be sold at the door during the event. Sponsors and private contributors can still join this year’s event. Attend the 3rd Annual Straight Pool Hall of Fame on August 21st at 7pm. Tickets on sale now online at  http://www.worldstraightpool.com/tickets.html

Experience was the key

Qualifiers for the 75th World Tournament of 14.1 Begins Saturday