Saratoga, Wyoming-  The 11th AndyClothUSA.com Wyoming Open has now expanded the event into a 4-day billiards extravenganza on April 5-8, 2018.  Also new divisions have been added making the WY Open a now 11 event tournament. The last several years all the divisions filled up, and last year the event was completely full 6 weeks before the event. By far the most popular billiards event in the Rocky Mountain states. They have expanded the field and added more tables to accommodate the popular event that will feature 8-Ball, 9-Ball, 10-Ball, Saratoga, 2 Women’s Divisions, a new Doubles event and the Wyoming State Junior Championships, all disciplines to be mastered at the 4 day Rocky Mountain pool extravaganza. Some of the greatest pool players on Earth returns including  Corey Deuel who became the first player to ever sweep all 3 Pro events. Former winners USA #1 Shane Van Boening, Johnny Archer,  Marc Vidal,  and 7-times Wyoming Champion Rodney Morris will all be returning. Legendary trick shot champion and a runner-up at the WY Open Mike Massey will be back for his 3rd year and past WY Open Champion Charlie Williams will be back as well for his 8th straight year.  It is widely considered to be the most anticipated tournament that players in this part of America looks forward to each year. Event promoter Mayor Ed J. Glode manages to bring players of all levels nationwide to Saratoga. The event is co-promoted by Dragon Promotions and is renown to be the biggest pro/Amateur pool event in the surrounding states drawing over 500 attendees. From beginner, intermediate, expert and pro/open level tournaments will all be available . The Wyoming Open is kicking in $11,000 this year to the entry fees to sweeten the purse with over $30,000 to be paid in cash prizes.

The event is sponsored by widely popular Andy Cloth USA and played on Valley-Dynamo Tables with Aramith Balls in locations all around town.  Local partners include Duke’s Bar & Grill, the Hotel Wolf & Restaurant, and the Riviera Lodge with all events coordinated by Shively Hardware.  Official Pool Cue is McDermott and Official Fine Dining Restaurant is Bella’s Bistro. In addition, the livestream is filmed by www.OnTheRailTV.com for a completely free stream.

” We grew 20% last year.  We use lodging tax dollars to support the Wyoming Open and the High Desert Shoot-Out in Rawlins, so all the support from the players and fans has been amazing. The Wyoming Open is the largest event of the year of any kind for the town of Saratoga. Every hotel room available in town is booked solid, and it gives all the businesses in town a huge boost”, explained Mayor Ed J. Glode. He adds, “And it was an incredible feat for the fans when Corey Deuel won all the Master’s events, that’s never been done before!” 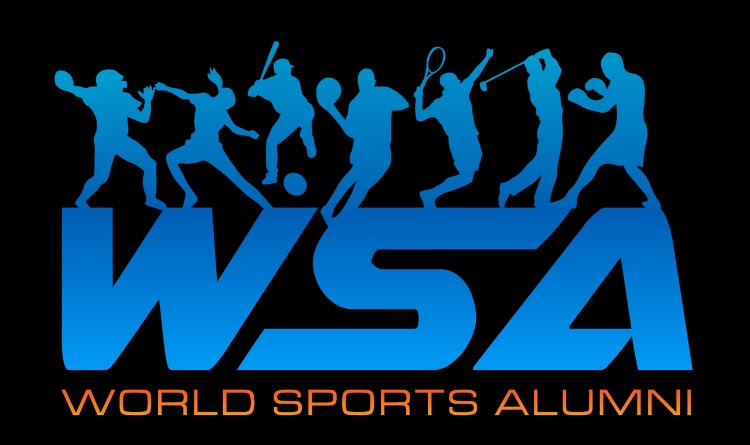 Sanctioned by the WSA WorldSportsAlumni.com

Monte Thayer, Tournament Director for the Wyoming Open and Vice-President of Andy Cloth USA adds, “We are excited to once again expand. We were at the point where the town had no more space to lodge guests nor place any more pool tables. So we had to add an extra day which to our delight has been well received. The entire town is excited and always highly anticipates everyone coming into town.  Seeing all the players and pros walk around and getting pics and autographs is a real treat.  And new host sponsor additions Saratoga Inn Resort and Whistle Pig Saloon have now been added as tournament locations. So with multiple locations expanding in town, we are adding a shuttle service for the first time to carry players all around town. The Wyoming Open will now have 49 tournament pool tables total in the competition.”

The Wyoming Open is organized and promoted by Shively Hardware & Dragon Promotions. For more info and to follow the WY Open goto www.facebook.com/wyomingopenvisit www.wyomingopen.com and on Instagram.com/WyomingOpen and on Twitter. Order Andy Cloth today by calling 307-710-1447 and Like Andy at www.facebook.com/andypoolcloth .The Wyoming Open is the only event in the Rocky Mountains where fans and players in the region can rub shoulders with the biggest stars of the game Past champions of the event include some stellar names. Visit wyomingopen.com to see the complete list. 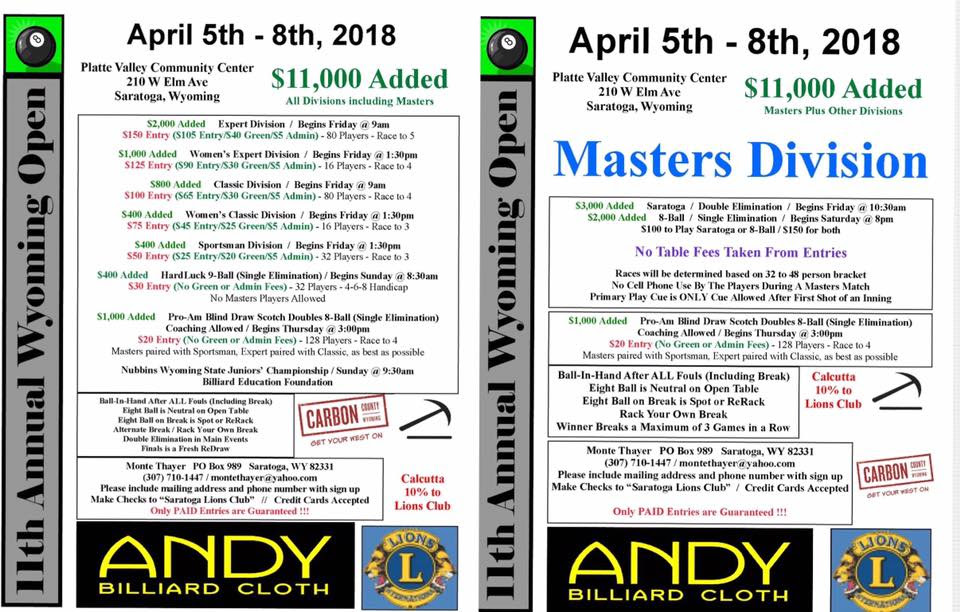 The event is majorly supported by the town’s own businesses which include : Hotel Wolf, Duke’s Bar & Grill, Riviera Lodge, Red Sage Spa, Pik Ranch, Carbon County, Bella’s Bistro, and Shively Hardware.For more info or to play in the Wyoming Open contact wyomingopen@gmail.com or call 307-329-8924. Andy Cloth was founded in 1973 and has become one of the premier professional playing cloths in the world today. Andy Cloth USA is based in Saratoga, Wyoming and has quickly impressed critics and professional players worldwide. Andy Cloth is used exclusively in major international events such as The Queens Cup, Women’s World 9-Ball Championship, USA’s 103 year old World Tournament of 14.1 , The China Open,The Beijing Open, the International 10-Ball Championships in Philippines, the Wyoming Open, the High Desert Shootout, the Women’s International Pool Championship, and many more. Andy Pro Tour Cloth is specially designed for the American pool player market. It is engineered for weather conditions, longevity, ball reaction, and speed. It is the most superior professional performance playing surface on Earth. Visit www.andyclothusa.com The Wyoming Open has become one of the most renown events in the country.

Alcano Does It the Hard Way at Emerald Billiards